Small fabrication shops encounter challenges in automation which can be attributed to the high initial capital investment required and the high-product-mix production nature of the industry with highly variable demand. 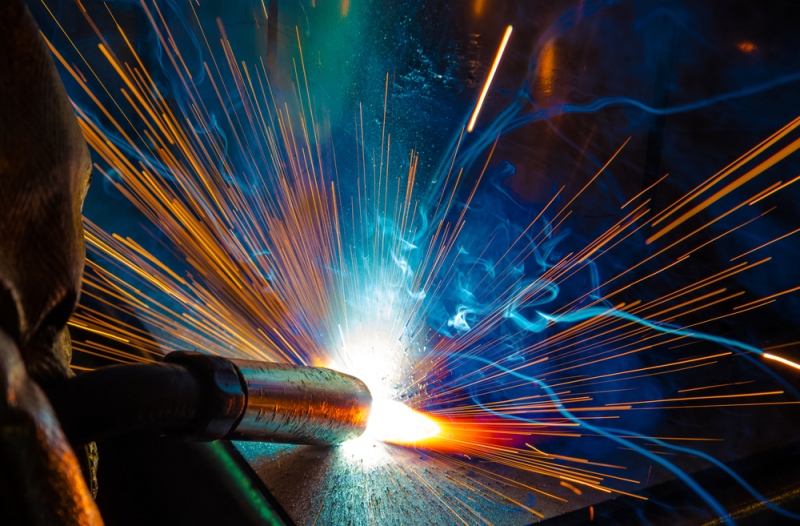 Universal robots identified the untapped potential in metal fabrication by introducing the collaborative robots. Their small fixture design and work piece handling which allows the arm to access more joints in one set up has made the welding robot more flexible. Robotics can do much to drive the growth of the fabrication industry and this article will highlight everything you need to know about automating your weld shop.

The traditional industrial robots could easily hurt a person while performing the articulated robot arm air movements in between welds. Cobots are an improved version of the traditional robots and are meant to promote safety at the work place. They are fitted with sensors that detect pressure, allowing it to slide a part against a press brake back gauge with enough force to ensure that the part is secure. They also halt immediately if they sense an obstruction in their way, reducing the number of work-related accidents.

The collaborative robots allow people to not only operate the automation but to also work alongside it at the work bench. They lack the hard guarding of traditional robots allowing for a direct interaction between the robots and humans. Cobots are easy to deploy and install and one does not need robotic engineers and developers on the site to deploy the robot.

With the right programming and fixation, the collaborative robot is supposed to produce the same high-quality weld over time as they are programmed to have a consistency in quality. Automation of your weld shop will enable you to get more work done when compared to use of human capital. Although these cobots produce output as fast as humans, they don’t take breaks or loss concentration while welding. The extremely rapid moves of the robotic arms in between welds allow a typical robot to weld more in less time.

Cobots are programmed in a way that allows one to re-deploy multiple applications on the same robot without changing the production layout. This implies that the robots are tooled up to address different tasks such as punching on the punching station, notching on the notching station or bending metal on the iron worker. A custom fabricator with changing demand levels and product mixes can wheel the collaborative robots to different positions at the work place.

The main problem facing small and medium sized companies in their efforts to automate their production process is the cost of acquiring the equipment which tends to be too high. Universal Robots is geared towards helping these SMEs that are looking to find a lower-cost system to automate their operation by designing inexpensive yet crucial systems. A small-scale fabricator looking to increase throughput for a particular product can now buy and integrate a cobot into his production process with ease.

Before acquiring the collaborative robot to work in your welding shop, it is recommended that you prepare your workers because of the wide spread automation risk-the risk that automation will disrupt one’s career. This can throw a wrench in an otherwise positive shop culture and a shop manager can mitigate these worries by ensuring there is good communication with the employees. Clear segregation of duties between the workers and the cobots will allow a free flow of process and ensure everyone maintains their job position.

Fabricators also need to ensure that there are workers in his work place with welding knowledge required by the robot operators and technicians. Installing a robot without hiring a welding expertise will only lead to stoppage of work mid-production. Training the workers to take care of the welding robots for the long run is also key to more reliable and productive welding.